Infusions and Reference Based Pricing: What Some Hospitals Don’t Want You to Know

Infusions and Reference Based Pricing: What Some Hospitals Don’t Want You to Know

Reference Based Pricing is quite the buzz-phrase these days. Payers, consultants, employers, plan sponsors, vendors and providers are all talking about it, and all of them have strong opinions one way or the other as to how it can impact the healthcare delivery and financial landscape.

Payers, RBP Vendors and Plan Sponsors argue, “Hospitals accept Medicare, so why can’t they accept more than Medicare and be happy?”

Health systems and providers respond, “The only reason we can accept Medicare as a loss-leader is because we can offset those losses through our commercial payers.”

Who is right? Who is wrong? Who is bending the truth?

However, there is one area where it is far easier to get to the truth and understand where Reference Based Pricing, broadly adopted, can make a huge financial difference; outpatient infusion therapies. The HCPCS codes under the letter “J” are a breeding ground for waste and abuse, with a small subset of providers taking extreme liberties to pad their coffers.

What makes infusion therapies so simple to quantify is the cost is basically 100% tied to the cost of the actual medication. Medication costs are easily tied to known and fairly fixed metrics such as AWP, WAC or ASP. In sparing you the details of all of the acronyms, the point is that there is little confusion as to the cost of medications coming from the manufacturers, while the cost of a Kidney transplant is far less transparent and simple to determine.

If I were to need 1 unit of Neulasta, the cost would be 1 Unit Neulasta ASP + 15 minutes x $2 per minute, or some variation thereof. We wouldn’t expect to see much variation, right? Wrong. Because many hospitals do not negotiate their cost for medications, such as Neulasta based on AWP (or any other fixed metric), those hospitals can essentially charge whatever they want…and they do.

Below is a distribution graph for three years of claims data from the AssuredPartners’ book of business outlining the paid cost per unit of Neulasta and the associated variance based on where the medication was obtained. 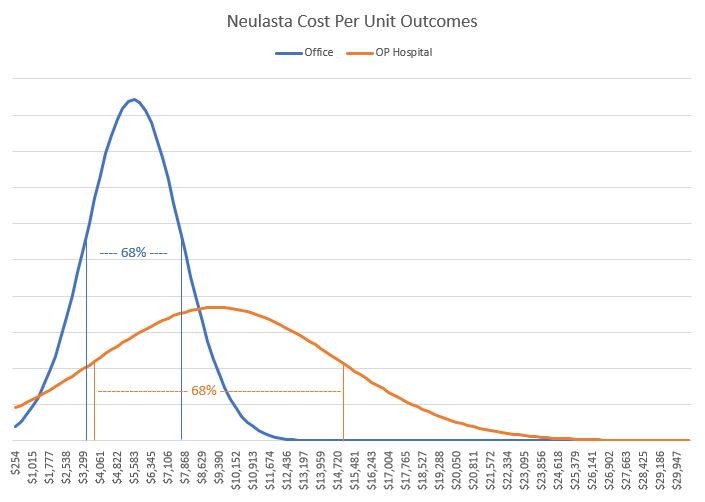 In simpler terms, in general, you will pay significantly more for this medication at an Outpatient Hospital setting AND you truly have no idea exactly how much it will cost your plan because the range of possible outcomes is so wide.

Unlike a surgery, where it is far more challenging to benchmark the true cost of the service to the hospital, we know almost exactly how much the infusion of this medication should cost the hospital based on metrics such as AWP.

This gets us back to Reference Based Pricing. How can we be sure that a reference based pricing model will deliver fair value for a service such as an infusion of Neulasta? When it comes to Medicare, most infusions are the same as ASP (Average Sale Price) plus roughly 6%. This means that for these drugs, Medicare is building in a 6% margin for providers over what they would spend to purchase the medication.

Between GPOs and 340(b) alone, we know many hospitals can acquire these drugs for far less than the ASP. In that respect, we already know that Medicare alone is a reasonable reimbursement. If we were to have a contract at Medicare plus 25% as the basis for infusion reimbursements, we should be comfortable that the hospitals are being paid a reasonable and customary amount, no? 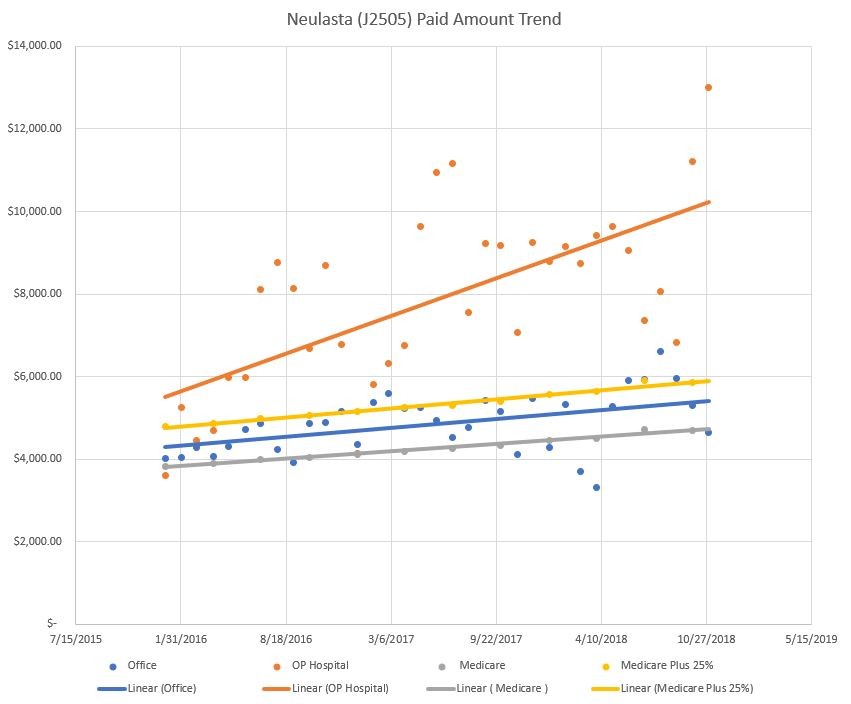 We can notice a few trends here. First of all, the rate of growth in the hospital paid amounts is far greater than the Office providers and Medicare, which are essentially in lock-step. This means the disparity between the hospital paid amounts and the office paid amounts per unit is growing. Additionally, we can see that Medicare plus 25% is easily more than the commercial plans pay office providers, so why wouldn’t this be a reasonable and customary charge? I would assume many office physicians would be more than happy to take a Medicare plus 25% reimbursement rate for Neulasta based on this data.

Perhaps it is a safety or quality issue? We hear that sometimes…”these drugs have to be administered in a hospital setting for safety concerns, and the quality and outcomes are better in the hospital setting.”

A study in the February 2014 issue of the Journal of Allergy and Clinical Immunology would argue otherwise. In their study, they compared individuals with immunodeficiency and their rates of infections when receiving infusion therapies at home, in an infusion center and at an outpatient hospital. The outcomes showed that infection rates at the hospital were nearly 60% higher than the infusion centers, with home infusion being the safest (and probably the most comfortable).

That study can be found here.

Plenty of hospitals in our data aligned quite closely with the office providers, and it would be unfair of us to vilify all hospitals for this cost disparity. However, those hospitals would also stand to potentially benefit, or at the very least, break-even from a reference based pricing reimbursement for infusions. The only hospitals and health systems that would “lose” in this deal would be the ones that are using artificially high reimbursement rates for infusions to offset financial losses in other aspects of their care delivery model.

Unfortunately for those hospitals, I do not want my clients to pay for the failures of the odd hospital’s business model. And while many of the insurance networks will avoid this type of confrontation with their partners hospitals and health systems, the more light we shed on this pernicious pricing structure, the more likely we are to be able to develop a solid solution to the problem. Perhaps this is a chance for the PBMs to be the hero (for a change)?

Source: Scott Mayer | Infusions and Reference Based Pricing: What Some Hospitals Don’t Want you to Know

For more information, contact info@apbenefitadvisors.com. The information contained in this post, and any attachments, is not intended and should not be misconstrued as legal advice. You should contact your employment, benefits or ERISA attorney for legal direction.